From Wikitokyo², the unofficial Megatokyo wiki
(Redirected from Aoi Mumu)
Jump to navigation Jump to search 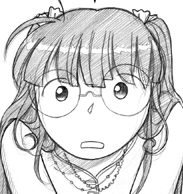 Aoi Mumu is hostess of the Mumu-chan's Voicevoice Paradise radio show. She is revealed to be a particularly energetic individual who, at least as far as her radio show goes, has a direct interest in seeing that her guests are happy. Whether before the show or on the air, she is quick to bring down criticism against Kimiko for not being happy enough.

Mumu is a veteran radio show talent who has been around long enough to understand the entertainment industry very well. She has a large enough name and following that she has attracted her own collection of fanboys who she is willing to talk about and make fun of on her show. However, despite her experience, or perhaps because of it, Mumu was easily thrown off balance by Kimiko attacking her for the things she was beginning to say about the fan she encountered in Akihabara.

Relations with other characters

Shigeo
Appeared as a guest on her show. He was the veteran talent Mumu relied on to help perk Kimiko up before the show started. First Shown Together: Strip 695.

Kimiko
Appeared as a guest on her show. First Shown Together: Strip 695.