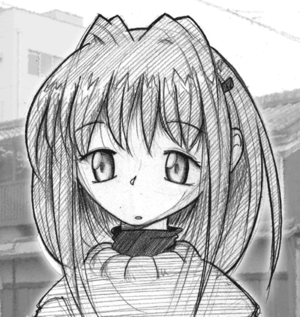 Kannazuki Kotone (神無月 琴音)[1] is the main female character of the computer game Sight. Her voice actress is Kimiko.

From the discussion between producer Matsui and character designer Sayuri we learn that the male protagonist of Sight was supposed to be color blind. Sayuri planned Kotone as 'a girl of nothing but grays'—hair, eyes, clothing, and, orginally, personality.

As a counterpoint, she was then rewritten from the 'sad girl' stereotype into the opposite—a cheerful girl. This is changed again after Kimiko's audition for the role—Sayuri likes the way she plays the role with a unique non-stereotypical sadness.