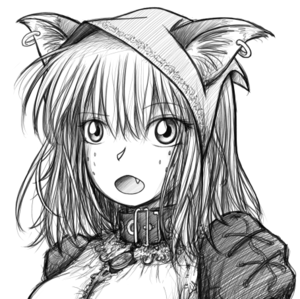 Sawatari Komugiko (沢渡 小麦子[1], also known as Mugi むぎ) is a chemistry teacher at Shiritsu Daitou High School, as well as a regular and staff member at the Cave of Evil. Mugi is a fox girl with a large, bushy tail, fox ears, and red hair (and fur). Her face is freckled and she has a visible fang. She is often seen wearing steampunk attire, a collar, and a headscarf with holes for her ears. She also normally wears small hoop earings on each ear. Mugi speaks with a thick accent in Japanese, though is said to be very refined in English. A late arrival to the comic, Mugi becomes a major character around strip 1344.

Relations with other characters

Miho
Miho and Mugi are shown to be very close.
Piro
Though Piro and Mugi first meet through Miho in strip 1344, Mugi was aware of events that happened to Pirogoeth in Endgames, including things that happened after Piro stopped playing, having met the character after she became an NPC.
Kenji
Mugi and Kenji are coworkers at the Cave of Evil.
Largo
Mugi and Largo get in a fight at school, with Largo incorrectly berating Mugi for being a catgirl teaching science.

Additionally, as a teacher, Mugi knows many of the students at Daitou.

Whether Mugi is an actual fox girl is never specifically stated in the comic, though when Piro and Mugi first meet Mugi responds "Yeah. They're real.", which could refer either to her ears and tail, or to her breasts (which are notably large). Fred, however, has stated that she was referring to her ears, and that she is a real foxgirl.[1] Mugi's name was not revealed until well after her initial appearance, leading to many nicknames and generic monikers including foxgirl, kitsuneko, and Holoko - a reference to Spice and Wolf.

Mugi has a daughter, Yakugashi, who has not yet appeared in Megatokyo.[2]