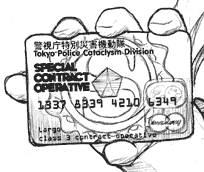 Largo shows off his new-found authority

A distribution of the Tokyo Police Cataclysm Division, the official TPCD badge doubles as a credit card with no credit limit. Largo is given one by Inspector Sonoda, sometime between strip 380 and 390.

The text on the card reads thus:

It also bears a logo strikingly similar to the Mastercard logo.

The credit card number is a short message in l33tsp33k, and is usually translated as "l33t beer and gear," appropriate given its usage. (The third word can alternatively be interpreted as "also.")