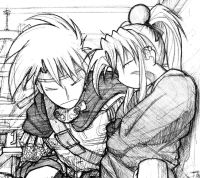 Endgames: Presence is a short story set in the world of Endgames, published in Megatokyo 2, with three original illustrations/drawings.

It features Largo (Largo's Endgames character by the same name) and Pirogoeth. It occurs sometime after the two characters meet and before their confrontation with Miho. Largo and Pirogoeth visit a town which feels strange for some reason neither can identify at first. Eventually they discover that the entire population of the town are being controlled by an unknown 'presence' which the two have been hunting for. After fighting their way out, while riding off Pirogoeth looks back and briefly sees a projection of Miho's Endgames avatar.

Unlike most Megatokyo related material, it is not available online.