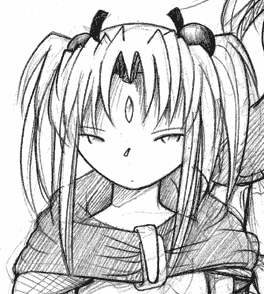 Pirogoeth is/was Piro's character in the MMORPG Endgames. She seemed to display the abilities of a wizard with the casting of fire spells. In Endgames: Disabled she also attempted a spell to turn Largo into mashed flesh, but her magic was not working. Pirogoeth prefers her spells but carries a small sword as a backup/alternate weapon.

It was while playing this character that Piro met Miho in-game, and subsequently defeated her. It is unknown if Largo assisted directly in this defeat (due to the image of Pirogoeth being the one to slash Miho's chest), though Miho has talked about how he defeated her.

Many readers of Megatokyo believe that the in-game characters Piro plays represent different aspects of himself, this is often done by MMORPG players and would make sense and also help to explain some of Piro's emotions and actions.

Like Piro, Pirogoeth seems quite serious, as shown in 608. Not much else is known about her at this point.