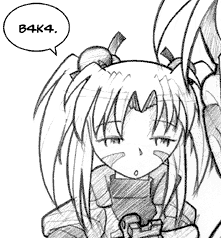 Piroko is/was Piro's character in the First Person Shooter Quake III Arena. There's not much to say about Piroko, especially because she is only featured in few strips, most notably the Grand Theft Colo side story. The name is almost certainly taken from the name "Piro" and the Japanese suffix "ko" (子) common on female given names. She has a rather disturbing liking of blood.

It is possible she is named after Motoko Kusanagi, of Ghost in the Shell fame, a possibility supported by the UnMod Omake.