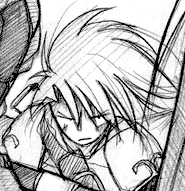 Largo as his Endgames character is essentially the same as in real life; in other words, a menace to himself and those around him. Although he tends to get on the nerves of Pirogoeth (Piro's avatar in the Endgames world), he is generally very useful as a front line warrior/meat shield. He has his own strange sense of honor, which would be admirable if it didn't cause him to abuse the various respawn points throughout the world. Also, he has a strange fixation on "b33r" (yes, even the in-game variety) and tends to see anything mobile that doesn't sell anything or aid him as something to kill for experience. If you ever wonder about his odd behaviors in real life, all you have to do is look at Largo's avatar and realize this is what reality looks like to him.

In the Endgames world, he helped to bring down Moh, Miho Tohya's Endgames avatar, after she abused the hidden in-game emotional system to cause the East coast U.S. server to crash. He was able to go up against Moh because, for some reason, his character was immune to the "emotional manipulation" (yes, his in-game character is that similar to him). Along with Pirogoeth, they were able to defeat Moh and end his control over the Endgames world.