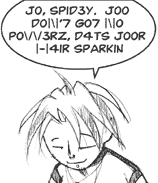 L33t D00d is the only name that has been given to a particular gamer who has appeared several times in Megatokyo. His most distinguishing feature is his use of advanced l33tsp33k; indeed, his "dialect" is so thick as to be incomprehensible to non-gamers. (Incidentally, his initial appearance is possibly the most popular—or at least well-known—Megatokyo strip ever.) He has only been seen speaking plain English twice, once when explaining Mosh Mosh Revolution to Largo, and while Miho is beating Largo at Super Moe Moe Ball.

He later reappears in an advisory role while Largo duels Ping in the 1¥ Arcade. In this capacity, his speech is accompanied by subtitles, which bear a loose resemblance to what he actually says. L33t D00d comes back in the next chapter when Largo faces Miho in Super Moe-Moe Ball, this time sitting on his shoulder like a conscience.

His next appearance is in Chapter 7 when he offers commentary to Largo and Junko during their Punished Pinion match. It ends with Junko pulverizing him because she believed he was trying to look up her skirt.

Largo
L33t D00d helps Largo for saving his life. He coaches and cheers Largo on when he is in the 1 Yen Arcade. First Shown Together: Strip 9.

Junko
L33t D00d has an attraction to Junko, considering her a "S3X4 Lil .JP CHIXOR". The attraction could be the reason he coaches Junko on instead of Largo, but it also may be because she needed more help than Largo. This attraction also gets him into trouble. Junko believed he was trying to look up her skirt after he checks her out. Her reaction is giving L33t D00d physical harm. First Show Together: Strip 772.