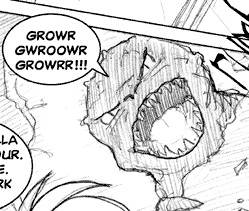 Rent-A-Zilla is a monster similar to Godzilla. According to Junpei it can be hired by the hour, but it is expensive; payment is made in pork rinds.

A Rent-A-Zilla first appears when Junpei hired it to free Largo after the TPCD arrested him. Later Inspector Sonoda uses one to disperse the fanboy horde.

Sometimes one can just be seen in the background, without anybody noticing its presence.

There appears to be numerous Rent-A-Zillas, at least enough to qualify as an expendable weapon as seemingly demonstrated when Ping asks for help during the fanboy horde's riot. Rent-A-Zillas seem to primarily be weapons for TPCD to use, but apparently are rentable either through TPCD or some Rent-A-Zilla organization.

Because of Miho's tendency to play tricks with the minds of other members of the cast it is uncertain whether her statement is truth or reassurence. If the slicing up of killed in action Rent-a-zillas is true it only begs the question of what is done with the meat afterwards, and if this is only done on official Tokyo Police Cataclysm Division business.

Chapter 9 sees an escalation of one from Spear Carrier status when Yuki steals one for Largo. Largo orders Yuki to use the Zilla to stop the Zombie Invasion while he rescues Piro. In this battle, the Zilla is bitten by Zombies and infected. Yuki's desire to cure him seems to level up her Magical Girl status.