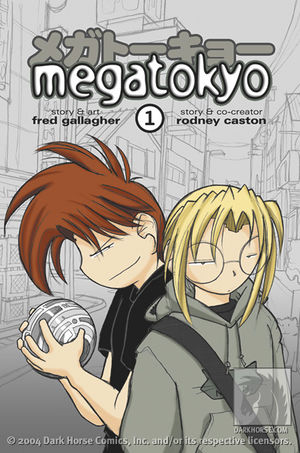 Megatokyo 1 is the title of the book including all strips from Chapter 0. It was published by Dark Horse Comics in March 2004.

There is also a German version published in October 2004 by Eidalon, a Polish version by Mandragora in July 2004, and an Italian version by Free Books in September 2005. After a preview in the issue #7 of the Faust magazine in 2008[1], a Japanese edition in the Kodansha Box publishing line was released in May 2009[2]. A French edition was also planned.

Megatokyo: Chapter Zero, a book previously published and containing the same chapter, is no longer available.

The japanese edition contains only one Shirt Guy Dom strip; there are 13 pages filled with translation notes at the end of the book instead.